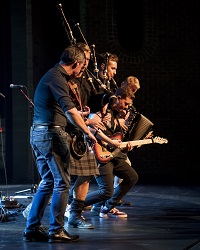 
Returning to The Arden Theatre after two sold-out performances, Skerryvore’s eight-members skillfully create a unique fusion of Celtic, folk, Americana, and rock. Their hard-hitting sound is uniquely their own and has won them legions of fans around the world. Skerryvore has been on a meteoric journey, playing to massive crowds and has been twice-named ‘Live Act of the Year’ in their home country of Scotland.